Racing stock cars has been part of the Olmscheid family history for over 35 years. It began with John Olmscheid, Doug and Jonathan’s dad. John raced in the late 70’s into the mid ’80’s on the dirt tack in Alexandria, MN before he hung up his belts.

John Olmscheid was back at the track as an employee when the I-94 track opened in Sauk Centre, MN.

Doug began his passion for horse power in high powered engines in high school. He started building and demolishing old cars in derbies around central Minnesota. The shift to oval track racing for Doug came after Jonathan, at the age of 15, purchased a Mercury Lnyx. Doug and Jonathan, not with great approval from their mother, converted the Mercury into the first of many racecars built by the Olmscheid boys. Doug and Jonathan were proud to use #83 to honor their dad, John. This number had been the Olmscheid Racing number since John first raced in the 70’s. Even though this first car was small, it instilled a huge drive and love for both Doug and Jonathan. They each drove this car before its short career ended on its side, sliding down the back stretch of the 1-94 Raceway in Sauk Centre, MN.

The following year, Doug and Jonathan began the 2002 season with a pair of Cutlasses. Jonathan kept the #83 and Doug chose the #85. In 2003, the numbers were switched to Jonathan in the #5 and Doug went to the #83. These are the current numbers. The brothers raced against one another for three seasons until Jonathan purchased a modified.

Doug and Jonathan’s last season of asphalt racing was in 2008. Doug, with the help of his dad and brother, built a1980 Malibu from ground up to race only one season before the asphalt on the hometown track was removed. The boys then had a decision to make: convert to dirt racing, drive two hours to continue asphalt racing or not race. Doug, with is first son on the way, decided to take a break. Jonathan switched styles to dirt track racing. He raced Midwest Modified of the Wissota sanction series. After a two year break and plenty of smack talk about Jonathan’s dirt track driving, Doug built a Monte Carlo as a street stock to join Jonathan in the fun of dirt track racing.

John Olmscheid was and is a very consistent part of his sons’ journey. He helps build and repair the cars. He has always supported them as a pit crew member. He has even filled in and raced the cars if they had to miss a night. The rest of the Olmscheid family cheers in the grandstand. Mary Olmscheid, Doug and Jonathan’s mom, is their biggest fan. She has sponsored them with Farmers Insurance and supported them every year.

In 2012, Jonathan started racing the US Ethanol car. He raced in several “Jam the Stands” events where his car was the show car. 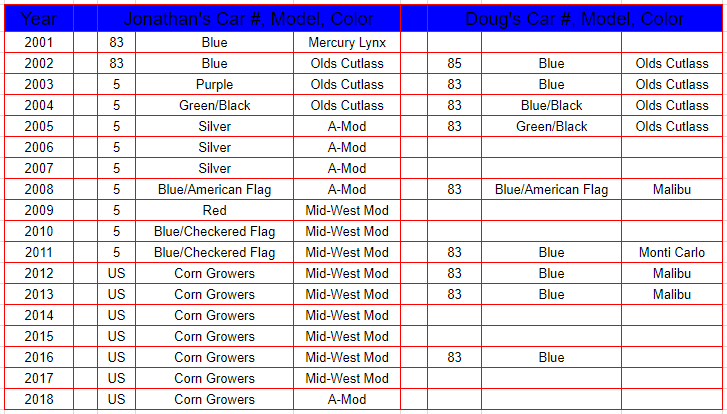