There are no upcoming events at this time.

John and Doug Olmscheid took time out to get into the racing spirit with a trip to Kansas to watch NASCAR. 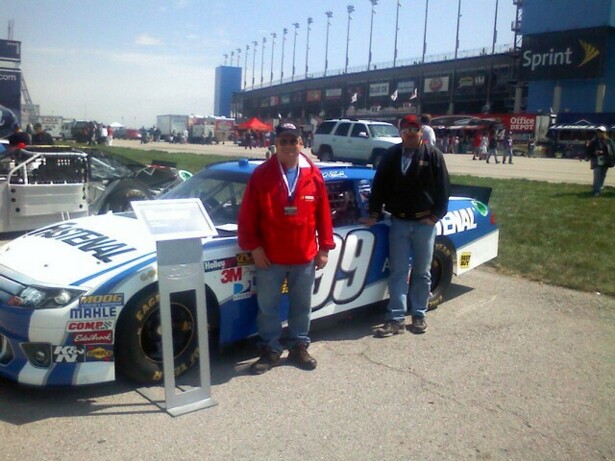 Here they are by NASCAR Driver Carl Edwards‘ #99 Ford Fastenal.

Here is Kasey Kahne‘s Hauler. Farmers Insurance is also one of Doug and Jonathan’s sponsors with Mary Olmscheid Agency.

Doug’s car is a 1980 Malibu that he raced on asphalt. He plans to convert it to a dirt track car. He says it needs a change in the suspension and some frame work to be converted to the dirt track rules. These are only a few things but they will take time.

He really just wants to get the car out on the track to have some fun!!

Jonathan is racing a Wissota Mid-West Mod again this year. He is having “US Ethanol” as his theme on the car for the 2012 season as his car is powered by E-98.

His focus is to include as many ethanol plants in the mid-west as he can by making appearances at the plants to display the car. With these appearances, he plans to race at the most local tracks near these plants to support Ethanol in our local sanctions.

Also, he is planning to compete in a Minnesota based Governor’s Ethanol Challenge series race.

The cars are in the garage and preparation is underway!